Vietnamese American dancer/choreographer Dam Van Huynh felt the urge to return to his homeland, where he recently showcased a contemporary dance project.

In his early 30s, Dam, nicknamed Mr. Dam by friends, has recently returned to Vietnam for the third time. The choreographer, who is featured on danceuk.com, a website listing top-notch British choreographers and dancers, and performed alongside two native dancers on a London street in BBC 4’s 2009 documentary titled “3 minute wonder,” has always been proud of his Vietnamese heritage. Dam never adopted an English name or stage name, and always used his Vietnamese name while developing his dance career abroad. His company is also called Van Huynh.

During his time in his homeland, Dam is eager to learn more about his home country’s culture and people, particularly Tet traditions and customs. He records everyday sounds, such as the sound of water lapping against boats, mosquitoes’ buzzes and frogs’ croaks at night, and the voices of local women bargaining at the market. During their three-week stay in Vietnam, Dam and British composer Jamie Hamilton worked on a dance piece, “Discovery,” which was enthusiastically received when it took place in late January a few days before Tet. Apart from showcasing impressive dancing, the performance surprised the audience with the diverse, authentic everyday sounds of Vietnam Dam had recorded. The program was mainly designed to explore traditional Vietnamese music and the connection between Vietnamese culture and contemporary dance.

“To tell the truth, after the project, I haven’t decided what to do next in Vietnam. But I just know that it’s time for me to go home,” the artist shared. At 5, Dam moved with his family to the US. His parents made sure that he and his eight siblings spoke Vietnamese at home. “Thanks to my parents’ strict discipline, I can now understand Vietnamese perfectly, though my speaking skills are limited. I can also enjoy and appreciate the beauty of “cai luong” (southern Vietnamese traditional music),” he said, smiling. 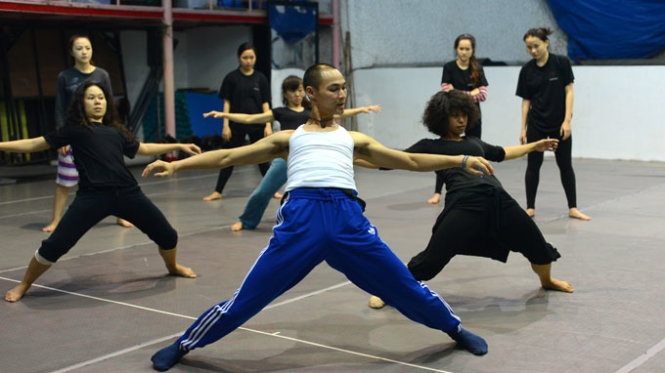 At 14, Dam was an overweight, introverted boy. One day, one of his best friends talked him into joining an extracurricular arts course at school. Dam wanted to enroll in a musical instrument class, but ended up in a dance class, as all the other classes were full. He soon fell in love with dance. Two years later, a famed ballet director recognized Dam’s talents and sought permission from his parents to send him to Los Angeles, California for specialized training. “After one year of ballet, it gradually dawned on me that I wasn’t cut out for the genre, and I began pursuing contemporary dance. I tried my best in an audition for a top contemporary dance company in Boston, and was recruited. The two years’ training there changed me dramatically, regarding my technical skills, disposition, and career orientation,” Dam shared.

Since then, Dam has performed in and choreographed many dance shows of various scales in the US, UK, Portugal, and Hong Kong.